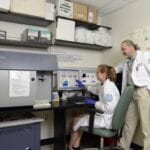 Many drugs such as agents for cancer or autoimmune diseases have nasty side effects because while they kill disease-causing cells, they also affect healthy cells. Now a new study has demonstrated a technique for developing more targeted drugs, by using molecular “robots” to hone in on more specific populations of cells.

“This is a proof of concept study using human cells,” said Sergei Rudchenko, Ph.D., director of flow cytometry at Hospital for Special Surgery (HSS) in New York City and a senior author of the study. “The next step is to conduct tests in a mouse model of leukemia.” The study, a collaboration between researchers from HSS and Columbia University, is in Advance Online Publication on the website of Nature Nanotechnology.

All cells have many receptors on their cell surface. When antibodies or drugs bind to a receptor, a cell is triggered to perform a certain function or behave in a certain manner. Drugs can target disease-causing cells by binding to a receptor, but in some cases, disease-causing cells do not have unique receptors and therefore drugs also bind to healthy cells and cause “off-target” side effects.

Rituximab (Rituxan, Genentech), for example, is used to treat rheumatoid arthritis, non-Hodgkin’s lymphoma and chronic lymphocytic leukemia by docking on CD20 receptors of aberrant cells that are causing the diseases. However, certain immune cells also have CD20 receptors and thus the drug can interfere with a person’s ability to mount a fight against infection.

In the new study, scientists have designed molecular robots that can identify multiple receptors on cell surfaces, thereby effectively labeling more specific subpopulations of cells. The molecular robots, called molecular automata, are composed of a mixture of antibodies and short strands of DNA. These short DNA strands, otherwise called oligonucleotides, can be manufactured by researchers in a laboratory with any user-specified sequence.

The researchers conducted their experiments using white blood cells. All white blood cells have CD45 receptors, but only subsets have other receptors such as CD20, CD3, and CD8. In one experiment, HSS researchers created three different molecular robots. Each one had an antibody component of either CD45, CD3 or CD8 and a DNA component. The DNA components of the robots were created to have a high affinity to the DNA components of another robot. DNA can be thought of as a double stranded helix that contains two strands of coded letters, and certain strands have a higher affinity to particular strands than others.

The addition of a molecular robot carrying a CD8 antibody docking on a cell that expressed CD45, CD3 and CD8 caused this strand to grow. The researchers also showed that the strand could be programmed to fluoresce when exposed to a solution. The robots can essentially label a subpopulation of cells allowing for more targeted therapy. The researchers say the use of increasing numbers of molecular robots will allow researchers to zero in on more and more specific subsets of cell populations. In computer programming language, the molecular robots are performing what is known as an “if yes, then proceed to X function.”

“The automata trigger the growth of more strongly complementary oligonucleotides. The reactions occur fast. In about 15 minutes, we can label cells,” said Maria Rudchenko, M.S., the first author of the paper and a research associate at Hospital for Special Surgery. In terms of clinical applications, researchers could either label cells that they want to target or cells they want to avoid.

“This is a proof of concept study that it works in human whole blood,” said Dr. Rudchenko. “The next step is to test it in animals.”

If molecular robots work in studies with mice and eventually human clinical trials, the researches say there are a wide range of possible clinical applications. For example, cancer patients could benefit from more targeted chemotherapeutics. Drugs for autoimmune diseases could be more specifically tailored to impact disease-causing autoimmune cells and not the immune cells that people need to fight infection.

The study was funded, in part, by the National Institutes of Health, National Science Foundation, and the Lymphoma and Leukemia Foundation.

Image: “This is a proof of concept study using human cells,” said Sergei Rudchenko, Ph.D., director of flow cytometry at Hospital for Special Surgery in New York City and a senior author of the study.