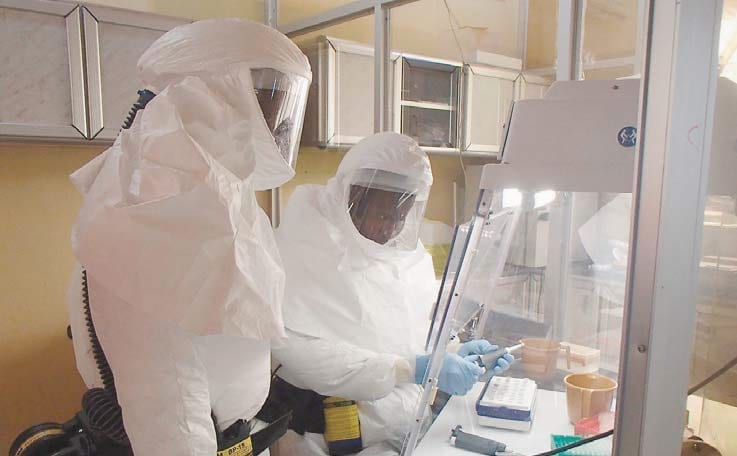 A technician sets up an assay for Ebola within a containment laboratory. Samples are handled in negative-pressure biological safety cabinets to provide an additional layer of protection. Credit: U.S. Army photo by Dr. Randal J. Schoepp

Does the blood of Ebola virus disease survivors contain antibodies and immune cells that could help doctors fight Ebola infections in other people?

An all-star team of researchers will begin answering this question, as it applies to four patients who were treated at Emory University Hospital.

The 10-institution national team is led by Rafi Ahmed, PhD, director of the Emory Vaccine Center and a Georgia Research Alliance Eminent Scholar, and Aneesh Mehta, MD, assistant professor of medicine at Emory University School of Medicine. Initial characterization of the patients’ immune responses has been performed in collaboration with the Viral Special Pathogens Branch at the Centers for Disease Control and Prevention (CDC).

The effort will be supported with funding from the Defense Advanced Research Projects Agency (DARPA) for up to $10.8 million over three years, including a base period award of $8 million and follow-on option years.

Any experiments involving live Ebola virus will be performed in Biosafety Level 4 laboratories at the CDC or the U.S. Army Medical Research Institute of Infectious Diseases.

In response to infection, the immune system produces a mixture of different antibodies –proteins that can grab on to viruses and sometimes neutralize them. Ahmed’s lab has developed a way to quickly generate large amounts of individual human antibodies.

The team plans to isolate antibody genes from patients’ white blood cells, produce the antibodies in cell culture, and test their abilities to stick to Ebola virus proteins and neutralize the virus. The samples will come from blood collected, with patients’ consent, both during their stay at Emory University Hospital and after their discharge.

“Our goal is to have a panel of fully human monoclonal antibodies with activity against Ebola,” Ahmed says. “Our preliminary data indicates that the immune systems of patients with Ebola virus disease were able to actively produce antibodies.”

An expected outcome of the project is to develop fully human antibodies targeting the Ebola viruses to guide the development of improved therapeutics and vaccines. Researchers plan to find out whether patients’ immune systems produced antibodies that are reactive across more than one strain of Ebola virus.

Ahmed and colleagues were able to perform similar research during the 2009 H1N1 flu outbreak. They learned that some people developed antibodies that are cross-reactive to a variety of flu strains, information that is guiding efforts to design a “universal flu vaccine.”

Ahmed’s team also plans to identify T cells responsible for reacting against Ebola virus. T cells represent an element of the immune system separate from the antibody-producing element; they kill infected cells and orchestrate the responses of other immune cells.

“This will allow us to fill a gap in our knowledge,” Ahmed says. “T cells are a critical part of antiviral immune responses, but there is minimal information available about T cell responses to Ebola and about viral proteins targeted by human T cells. This information also will be useful in Ebola vaccine development.”